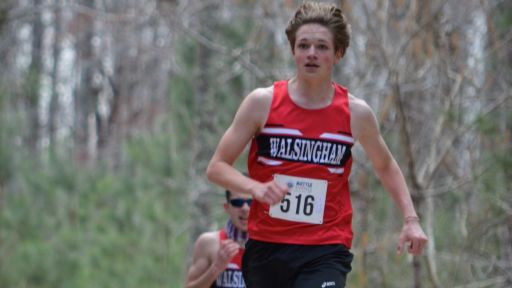 The Trojans hosted their second cross country meet of the season as well as senior recognition on March 13 at York River State Park in a tri-meet with Peninsula Catholic and Nansemond-Suffolk Academy. The varsity boys placed second behind Peninsula Catholic.

Sophomore Parker Shonka won the varsity boys' race with a time of 18:50.87 in a very tight race besting his opponent from Peninsula Catholic by a mere 27hundredths of a second. Sophomore Jake Falcone was close on their tails in third place with a time of 18:54, running his best race of the season. Brendan Bouchard placed 10th and was the third Trojan across the finish line running a career personal record of 20:54. Senior Dominick Yacono was the fourth Trojan scorer placing 11th in a time of 21:38. The next three runners, all eighth graders, contributed to the team score. Clay Carpenter finished in 13th place with a career personal best time of 22:13.06; Andrew Robinson finished 14th with a career personal best time of 22:13.59; and Nick Primich was 15th in 22:20. Andrew and Nick served their team well by finishing well ahead of NSA's third through fifth runners to displace the scores of NSA's athletes putting the Trojans well ahead with 38 points over NSA's 72 points.

The Trojan girls' three varsity eligible athletes were led by freshman Maxine Horne in a time of 24:55 in fourth place. Junior Emma Lobash was the second finisher for the Trojans in 25:13, in sixth place. Summerlin O'Hallarn was fourteenth running a personal best time of 32:11. The Trojan girls did not have a team score because they do not have the required five athletes.

The team recognized senior and team captain, Dominick Yacono for his six years and many miles of dedication to Trojans cross country program and David Carter for three years of competing for the team. The team wishes both seniors the best of success in their future endeavors.

The team is fortunate to have the opportunity to compete at the TCIS Invitational on March 18 at Bells Mills Park in Chesapeake. Good luck to the Trojans at your last meet of the season!