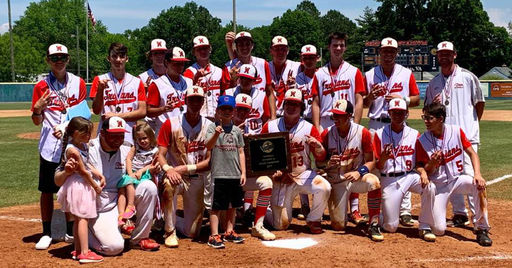 The varsity baseball team dealt with something this season that this program had never had to experience before. This year, the Trojans were the reigning champions, and everyone was out to try and take that title from them. On Saturday, the Trojans had one more game to defend their title, the VISAA Division III State Championship Game against Southampton Academy, a rematch of the Trojans' first-ever state championship appearance back in 2015.

The Trojans sent a familiar face to the mound in this year's championship game. Jacob Miller-Bopp '22 returned to the same mound that he earned the win in the Trojans' first championship last year. Miller-Bopp came out attacking the zone and quickly retired the first two Raiders' hitters to start the game. The next three hitters all reached via singles but Miller-Bopp struck out the following batter to strand the bases loaded. The Trojans half of the inning started out with fireworks as Tanner Schobel '20 lined the first pitch into the left field corner for a triple. One batter later, the Trojans pushed across the first run of the game on a wild pitch that scored Schobel from third.

After a scoreless second inning for both teams, it was the Raiders turn to put a little pressure on the Trojans. Once again using a three-hit inning, this time the Raiders were able to scratch out a run on a two-out line drive single to right field to even the score at 1-1. With two outs and runners on the corners, Southampton looked to try and take their first lead, but a hard ground ball up the middle was fielded by Miller-Bopp on the mound and the threat came to an end.

The Trojans did not wait long to retake the lead. This time Schobel led off the inning with a double that bounced up against the wall in right-centerfield. The next two Trojans were retired and with two outs, Schobel still stood on second base as one of the heroes of last year's championship game, Cody Christman '22, came to the plate. Christman once again stepped up and drove the first pitch he saw deep into the left center field gap for an RBI double. Christian Carter '19 followed with a ground ball up the middle that was fielded cleanly by the Raiders' second baseman, but an errant throw escaped the first baseman and Christman was able to score as Carter ended up on second base. The next batter was Jacob Miller-Bopp who helped himself out by lining an RBI single to right field to give the Trojans a 4-1 lead after three complete innings.

After a quick shutdown inning in the top of the fourth, the Trojans looked to pad their lead in the bottom of the frame. Trey Christman '23 started the inning with a line drive single to centerfield. After an intentional walk to Schobel put runners on first and second with one out, Zach Stanko '19 came to the plate looking to make his opponent pay for their decision to not pitch to his teammate. Stanko did just that, crushing a breaking ball past the shortstop that rolled to deep left center field for an RBI double. A Lincoln Lubsen '21 sacrifice fly put the Trojans up 6-1 with a runner on third and two outs. Once again, Cody Christman came up big with a line drive over the third baseman's head for an RBI double down the line to end the day for the Raiders' pitcher. The next pitcher was greeted rudely by the Trojans as the first strike he threw resulted in a line drive RBI single off the bat of Christian Carter. After the inning finally came to a close, the Trojans had a commanding 8-1 lead.

A two-out double by the Raiders in the top of the fifth scored Southampton's second run of the day, but the inning came to an end when Jacob Miller-Bopp struck out his fourth batter of the day. Base hits by Nate Wildasin '19 and Will Wyles '23 started another rally for the Trojans in the bottom of the fifth, and both runners were able to come across on a sacrifice fly by Tanner Schobel and a wild pitch while facing Zach Stanko.

Miller-Bopp once again held Southampton scoreless in the sixth as his 103rd pitch of the day induced a fly out to the Trojans' centerfielder and brought the Trojans to the plate needing just two more runs to end the game via mercy rule. After a leadoff walk to Lincoln Lubsen, he was replaced by courtesy runner Justin Smith '22. The next two Trojans were retired but a Raiders' error and a walk to Nate Wildasin loaded the bases for eighth grader Trey Christman. Christman lined the second pitch he saw right back up the middle for a base hit, and courtesy runner Wilson Estep '22, the younger brother of last year's baserunning hero Jack Estep '18, raced around from second base and score the game-ending run!

Miller-Bopp went the distance on the mound, holding the Raiders to just one earned run and was the winning pitcher in the state championship game for the second consecutive year, an incredible feat for anyone, let alone a freshman! Eight of the nine Trojans in the starting lineup had hits, and seven of the nine had at least one RBI. Tanner Schobel, Cody Christman, and Trey Christman all had multiple hits in an impressive all-around victory.

The Trojans' 12-2 victory gave them a school-record 23rd win on the season, breaking the record of 21 wins set last season. The Trojans began the season ranked atop the first VISAA Division III poll and held that ranking all season on the way to their second consecutive championship. Over the course of the year, the Trojans outscored their opponents 259-128 and posted an incredible team batting average of .339 and team ERA of 2.91.

The Trojans will say goodbye to a senior class that has meant so much to the program over the course of their high school careers. Nate Wildasin hit .328 and reached base at .544 clip as a senior while providing outstanding defense in centerfield, all while playing through multiple injuries including a tear in his shoulder that could have ended his season. Nate will attend Coastal Carolina University next year and will major in Biology. Zach Stanko finished off his outstanding four-year career by embracing his role as the "super utility player," playing all nine positions for the Trojans while mashing at the plate. Stanko set the school record with eight home runs this season, and will leave with the career record in doubles (28), home runs (12) and tied for the record with 131 career hits. He will continue his baseball career next season at Longwood University. Christian Carter finishes up his career as a five-year starter for the Trojans, playing in an incredible 130 games over his career. Carter is the only player in Walsingham history to have played in three state championship games and will always be remembered for his dedication to the program. Carter set the school record this season with 40 RBIs, and will graduate with the career record in games played (130), wins (83), and RBIs (101). Christian will continue his baseball career next season at California University of Pennsylvania, the same school where Trojans' Coach Ian Heisel and former Walsingham standout Thomas Chisam '15 played their college baseball. This entire senior class will be dearly missed as the Trojans attempt for a three-peat next season!

The Trojans also received recognition for some of the outstanding individual performances this year. The Trojans had more players on the All-State Team than any other school, with six total players being awarded with this prestigious honor. Christian Carter, Cody Christman, Tanner Schobel, and Zach Stanko were named first team All-State, and Lincoln Lubsen and Jacob Miller-Bopp were named to the second team. For the second year in a row, Tanner Schobel was named the VISAA Division III Player of the Year for his outstanding season both at the plate and on the mound. The Trojans' head coach, Ian Heisel, was voted VISAA Division III Coach of the Year for the second consecutive year as well.