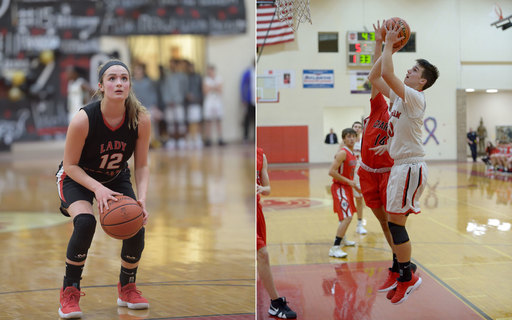 The Trojans' basketball teams hosted a triple-header against Tabb High School on Monday, Jan. 6, for their first home games of 2020. The Trojans emerged victorious in all three games including a 37-19 win by the JV boys.

The Trojans' varsity girls' basketball team entered Monday's contest with a 5-2 record on the season after dropping their last two games against two tough opponents, Maggie Walker Governor's School and the Steward School. The Trojans traded baskets with their opponent early in the game and a buzzer-beating three pointer by Nicole Hagopian '22 gave the Trojans a 13-11 lead after the first quarter. The Trojans picked up the defensive intensity in the second and held the Tigers to just two points, sending the Trojans into halftime with a 25-13 advantage. The Tigers made a run in the third quarter to cut the deficit to as close as four points, but the Trojans were able to pull away once again and went on to a 48-34 victory. The Trojans held Tabb to just 25 percent shooting and forced 20 turnovers in an impressive defensive effort.

Nicole Hagopian led the Trojans with 21 points, five assists, and six steals while knocking down four three-pointers. Julia Wilson '22 was a force on the boards as she grabbed 12 rebounds to go with her seven points. Sarah Newman '21 and Noelle Kokolis '24 also knocked down several clutch shots for the Trojans and finished with seven points each. Also scoring for the Trojans were Frankie Riggs '20, Clara Riggs '23, and Rachel Owens '22.

The Trojans are now 6-2 on the season and will return to action immediately as they travel to Tappahannock to face St. Margaret's on Tuesday, Jan. 7.

The Trojans' varsity boys' basketball team entered play on Monday with a 9-3 record after dropping their TCIS opener to the Steward School on Friday. The game against Tabb started out as a back-and-forth affair that saw both teams trade baskets throughout. The score was tied 18-18 after the first quarter, and remained tied 34-34 at the half. The Trojans took a 42-41 lead in the third quarter and never looked back from there. The Trojans maintained a small lead into the final minutes and Jordan Horne '22 and Cooper Jones '22 went a combined 6-for-6 from the free throw line to seal the 70-64 victory for the Trojans. The Trojans shot an outstanding 63 percent from the field and outrebounded the Tigers 35-25 for their tenth win of the season.

Paul Williams '23 shined for the Trojans on both ends of the court, finishing with 19 points and 13 rebounds while shooting 9-for-11 from the field. Cooper Jones knocked down four three-pointers en route to scoring 18 points to go along with six rebounds and four assists. Jordan Horne '23 added 12 points and seven assists while going 8-for-8 from the free throw line. Matt Nunez '21 scored nine points and grabbed three rebounds while blocking three shots. Lincoln Lubsen '21 was 3-for-3 from the field and finished with seven key points as well. Also scoring for the Trojans were Jayden Evans '22 (four points) and Jackson Hughes '22 (one point).

The Trojans now stand at 10-3 on the season and will take the court next on Thursday, Jan. 9, at Veritas Collegiate. This victory was win No. 498 in the career of Trojans' coach Billy Barnes, who will look to reach the 500-win milestone potentially as soon as next week when the Trojans host Norfolk Christian on Jan. 14 at 7 p.m.

We are once again able to offer in-person tours! Please contact Admissions Director Ashleigh O'Rourke at admissions@walsingham.org or 757-259-1430 with any questions or to schedule yours today.