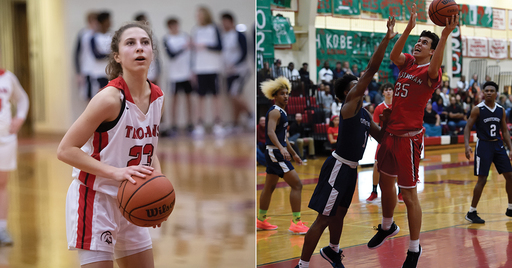 Both Trojan varsity basketball teams qualified for their respective state tournaments this week but knew they would have an uphill battle being a lower seed. The girls were ranked twelfth in the VISAA Division III Girls' State Tournament and the boys were the tenth seed in the VISAA Division III Boys' State Tournament. Both teams opened on the road on Tuesday evening.

On Tuesday, Feb. 25, the girls' varsity basketball team took to the road for a trip to Roanoke to face off against the fifth-seeded Roanoke Catholic Celtics. The team was finally back at full strength for the first time in over a month with the return of 2019 All-Conference player Julia Wilson '22. The Trojans started slow on the offensive end but remained in the game with a strong defensive effort, trailing by a score of 9-2 after the first quarter. The Trojans made a run in the second quarter that was capped by a block and three-pointer on the offensive end by Nicole Hagopian '22 to give the Trojans an 18-13 halftime lead. The Celtics battled in the second half but the Trojans' defense was too much and the Celtics were never able to recapture the lead. With a five-point lead and just over a minute to go in the game, Sarah Newman '21 took the inbound pass coast to coast and finished with a basket and a foul to give the Trojans a much needed cushion. When the final buzzer sounded, the Trojans prevailed with a 36-29 victory.

The Trojans held their opponent to just a 15% field goal percentage for the game and caused 18 turnovers. Nicole Hagopian led the Trojans offense with 14 points and added seven rebounds and three steals. Sarah Newman had a great all-around game with nine points and seven rebounds. Noelle Kokolis '24 had eight points, five rebounds, and three steals in her first playoff game as an eighth grader. Senior Olivia LeJeune scored two points while grabbing three rebounds and dishing out four assists in the victory. Julia Wilson scored two points and grabbed seven rebounds in limited minutes while returning from her injury. Senior Frankie Riggs and her sister Clara Riggs '23 battled inside for the Trojans and combined for seven rebounds. Becky Villeda '22 also saw action and had a big steal and deflection on the defensive end for the Trojans.

The victory was a huge boost of excitement for a team that had battled injuries all year, but that celebration had to be short-lived as the Trojans returned home from Roanoke only to hit the road again for a trip to Lynchburg on the very next day. The Trojans faced off against the fourth seed New Covenant School on Wednesday, Feb. 26, in the quarterfinals. The Gryphons of New Covenant School came out from the start looking strong. The Trojans battled from the tip but trailed 17-13 after the first quarter. The second quarter saw the Gryphons start to make a run as they pulled ahead and took a twelve-point lead into halftime. The Trojans cut the deficit to as low as seven points in the second half but ultimately their effort would come up short and New Covenant came away with the 56-41 victory.

The Trojans' season comes to a close with a 12-12 record. In their first season under Coach Pete Kokolis, the Trojans showed a tremendous improvement over last year's team that won just five games. Looking ahead to the future, seniors Olivia LeJeune and Frankie Riggs will be missed for their leadership and competitiveness, but the Trojans will return a talented team that reached as high as fifth in the state rankings before injuries changed the team's path early in conference play.

Boys win at No. 7 Portsmouth Christian before season ends at The Carmel School

On Tuesday, Feb. 25, the boys' varsity basketball team faced off against seventh-ranked Richmond Christian School in the first round of the VISAA Division III State Tournament. The game was played at Richard Bland College but was considered a home game for the Patriots of Richmond Christian. The Trojans defeated the Patriots in commanding fashion earlier in the season but the recent results had seeded the Patriots higher for the state tournament. The night did not start well for the Trojans as their star center Matt Nunez '21 (First Team All-TCIS) was injured in pregame warm-ups and would not be able to play. Without a player that was such a big part of their team on both sides of the court, the Trojans knew they would really have to step up in order to pull off the win. Both teams came out hot in the first quarter and continued to trade baskets for the majority of the first half. A late run by the Patriots was answered by a last-second field goal by Walsingham's Jordan Horne '22 to make the halftime score 37-32 in favor of the Patriots.

The third quarter started with the teams continuing to go back and forth and the Patriots lead reached as high as eight points several times, but the Trojans made a run late in the quarter to tie the game at 54-54 going into the fourth quarter. With just over two minutes remaining in the game, Cooper Jones '22 made a three-pointer to tie the game at 61. After a steal by Lincoln Lubsen '21, Jordan Horne was able to penetrate and draw the foul and his two free throws gave the Trojans a two-point lead. The Patriots hit a three-pointer on their offensive possession to regain the lead but a quick three by Cooper Jones put the Trojans back up with a minute to play. However, this lead didn't last long as Richmond Christian was able to tie the game with a basket on the ensuing possession. With just 30 seconds remaining, Jayden Evans '22 scored on a backdoor cut to put the Trojans back up two. The Trojans were finally able to get the stop they needed on the defensive end as a deflected pass ended up in the hands of Paul Williams '23. The Trojans looked to seal the game on a transition basket by Williams but the basket was waved off by a foul called prior to the shot. This only ended up holding off the celebration for a few seconds as once again, Paul Williams was able to score off the Trojans' inbound play with just seconds to go to seal the 70-66 victory.

Paul Williams led the Trojans with 20 points and six rebounds on a very impressive 8-for-9 shooting from the field. Cooper Jones scored 19 points and shot 5-for-7 from three-point range while also adding four assists and three steals. Jordan Horne scored 18 points and dished out eight assists as well. Jayden Evans was a late addition to the starting lineup due to the injury to Matt Nunez but shined with 13 points on 6-for-9 shooting. Lincoln Lubsen played all 32 minutes for the Trojans and grabbed four rebounds to go with three assists and two steals.

The Trojans' tough win earned them a matchup with The Carmel School on Wednesday evening. The Trojans came into the quarterfinal game still shorthanded and with a tough matchup against the second-ranked team in their division. Walsingham came out to an 11-10 lead after the first quarter but soon the momentum swung in favor of the Wildcats as a deep three-pointer just before halftime gave the Carmel School a seven-point halftime lead. The Trojans' defense was unable to get them back into the game as the Wildcats continued to score at a quick pace and eventually pulled away. The Trojans' season ended up coming to an end with a 63-48 defeat.

The Trojans finished with a 16-12 record in a rebuilding year after losing their top four scorers from last year's team. This young team showed tremendous potential and should be fun to watch moving forward as they hope to return every member of this senior-less team next year.