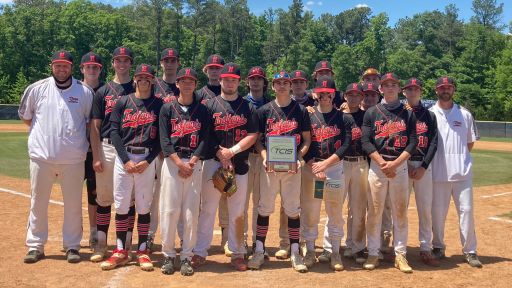 The Trojans' path to the TCIS championship began with a 6-3 victory over Nansemond-Suffolk Academy. Jacob Miller-Bopp '22 kicked off the scoring with a two-run home run. The Trojans would go on to score four more in the bottom of the fifth inning to take a lead that they would never relinquish. Lincoln Lubsen '21 pitched five solid innings to earn the win. Donnie Evans '22 pitched the final two innings to earn the save.

The semi-finals game against top-seeded Greenbrier Christian Academy was an instant classic extra innings thriller. Justin Smith '23 scored two on an early triple. Ayden Evans '24 hit a huge game-tying home run in the top of the sixth inning. Smith would strike again for the go-ahead RBI in the top of the eighth. Joey Masiak '23 struck out the final batter in the bottom of the eighth inning to seal the 5-4 win.

This was Walsingham's first-ever victory over Greenbrier Christian in the baseball program's history.

The TCIS championship game was a low-scoring affair. Walsingham only scored once but that was all they would need to secure their first TCIS title. The Trojans were led by a stellar pitching performance from Lubsen who pitched a complete game no hitter with 11 strikeouts. Miller-Bopp drove home the game's only run with a third-inning triple. Lubsen was named TCIS Tournament MVP and First-Team All-TCIS. Miller-Bopp joined him on the First-Team All-TCIS list.

VISAA tournament play kicked off with an offensive explosion by the top-seeded Trojans. They scored a whopping 15 runs in the second inning alone en route to a 18-0 shutout victory. Sam Villeda '21 collected two hits and drove in two in his final home game. Cody Christman '22, Trey Christman '23, Davis Neighbor '24, Ayden Evans '24, and Justin Smith '23 also all drove in two runs. Paul Williams '23 and Smith would combine for the Trojans' second consecutive no hitter.

Walsingham would go on to face the fourth-seeded Fuqua School in the semi-finals. After Fuqua got on the board early with two runs in the first, the Trojans got one back in the third inning on a Lincoln Lubsen RBI single. Luke Harlow '24 would then go on to score from second base on an error two batters later to tie the game. The Trojans scored four more in the fourth inning to take the lead and tacked on another run in the fifth inning on a Trey Christman RBI single. Davis Neighbor settled in after the first inning and gave up just one more hit over the next four frames. Wilson Estep '23 came on in relief for the Trojans and held the Falcons scoreless in the sixth inning. Fuqua made it interesting in the seventh inning, scoring two unearned runs and bringing the tying run to the plate, but Donnie Evans was able to close out the game by inducing a groundout to second base, securing a 7-4 victory for Walsingham.

Walsingham went up against the second-seeded Carlisle School in the VISAA finals. The Trojans scored their first run in the third inning. Joey Masiak singled, followed by a Sam Villeda bunt single to get Masiak into scoring position. Masiak scored on a Cody Christman two-out single. Lincoln Lubsen would add a second run in the sixth inning—a towering home run to left field in his final high school at bat.

The two runs was all Walsingham needed as Lubsen starred from the pitcher's mound as well, pitching a complete game shutout with nine strikeouts. The 2-0 victory gave Walsingham and Head Coach Ian Heisel their third-straight VISAA Division III championship! 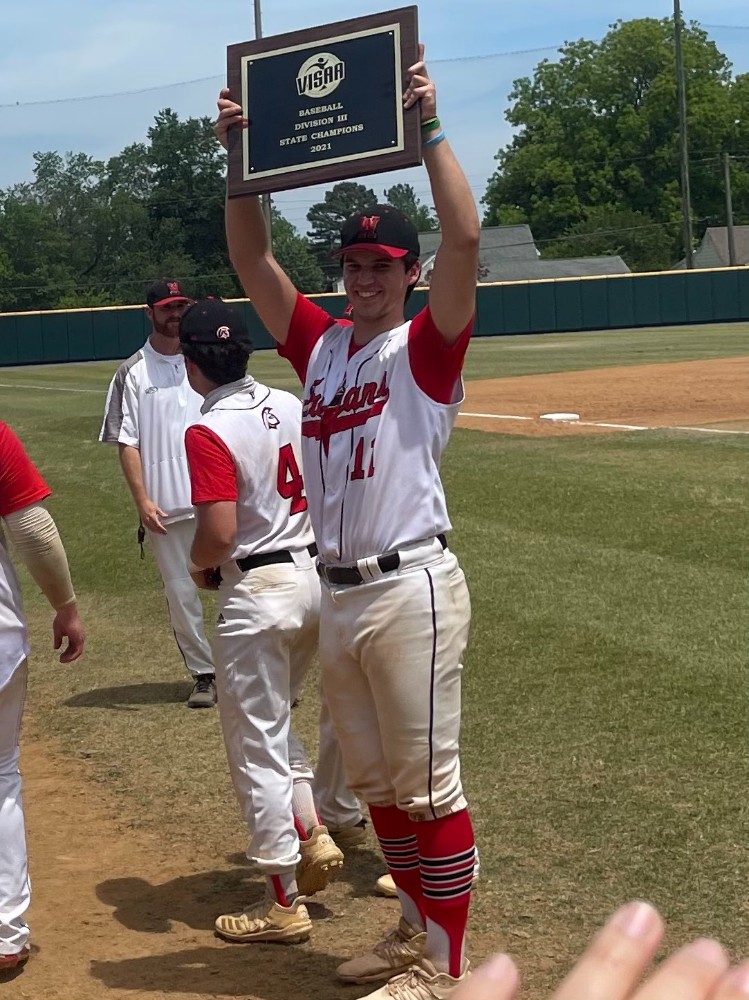 Congratulations to all on a tremendous season!