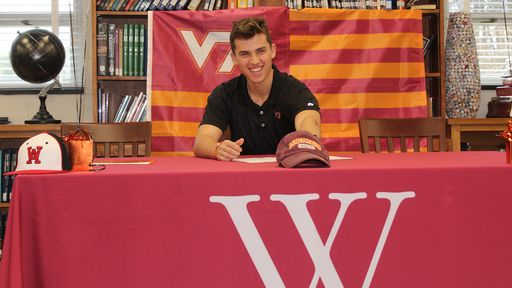 Schobel has played multiple positions as a Trojan including pitcher, catcher and middle infielder. At the signing ceremony, head coach Ian Heisel praised Tanner for his versatility.

"Tanner always does what's best for the team," Heisel said. "Wherever you ask him to play, he will and he will at a high level. That's what makes him a winner."

Schobel has been first-team all-TCIS the past three seasons and was first-team all-state in 2017. Additionally, he is committed to play for the Perfect Game Collegiate League's Mohawk Valley DiamondDawgs in Little Falls, N.Y. this summer.

"Walsingham set me on the right path academically and athletically to help get me where I needed to be in order to play for a program like Virginia Tech's," Schobel said. "I owe much gratitude to my teachers, coaches and, of course, my family for all of their support."