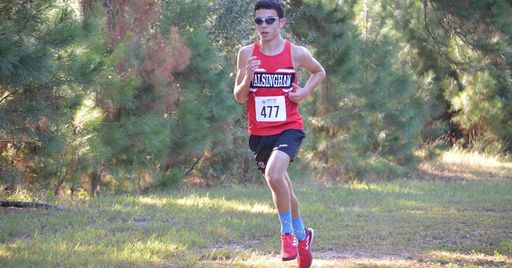 The Trojans competed in their home meet on the Eastern State course on Saturday. Every single varsity athlete improved their time on the course from the previous week. The varsity boys placed third out of six teams. The Trojan girls scored 77 points placing fifth out of five teams, just narrowly missing fourth place by four points.

The varsity boys were led by senior Ethan Ricker in sixth place out of 53 runners with a time of 19:21. Freshman Jake Falcone was the second Trojan in eighth place and junior Michael Dye was third for the team in 14th place with a personal record nine seconds faster than he has ever run previously. Eighth grader Sebastian Vishton was fourth for the team in 26th place and junior Dominick Yacono rounded out the Trojans in 28th place.

The varsity girls were led by senior Khatiana Perez in ninth place out of 39 runners with a time of 24:26 followed closely by sophomore Emma Lobash in tenth place. Kate Digges was the third Trojan in16th place with senior Alex Haggerty finishing fourth for the team in 19th place. Eighth grader Maxine Horne was the fifth scorer for the team in 23rd place. In Maxine's first varsity race, she had a personal record that was 1:37 faster than she has ever run before.

The JV team placed four runners in the top 10. Parker Shonka earned third place out of 36 runners, Andrew Robinson was seventh, Lucas Perez was eighth and Harrison Zima was ninth. The fifth scorer for the JV boys was Gene O'Hallarn in 14th place. The JV boys had a fantastic race scoring 40 points, missing first place by just one point.

After the meet, the team and families honored the graduating seniors Ethan Ricker, Khatiana Perez, Alex Haggerty, and Esther Huang.

The Trojans compete at the CNU Captain Chris Invitational on Saturday, Sept. 28 at Lee Hall Mansion.
Powered by Finalsite