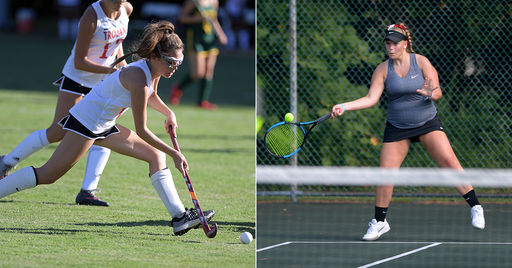 The Trojans and Navigators went back in forth in the first half with both teams having scoring chances but the game went to halftime with no score. The Trojans opened up a second-half lead, scoring on an offensive corner. The goal was scored by Martha Page Norsworthy and the assist was to Noelle Kokolis.

Both teams continued with strong play in the second half, creating scoring opportunities and playing tough defense. HRA scored with 12 minutes left in the game to level the score.

The Trojans were not to be denied though as they pressed forward and Martha Page score the game-winning goal with just under five minutes left to play! Those late-game minutes showed the heart and character of this team as they held on to capture the win, their fifth of the season.

The Trojans defeated the Navigators earlier this season, 5-4, in a non-conference meeting. The Trojans were once again able to emerge victorious, this time by a score of 6-3.

Highlights of the match included the first TCIS win of the season for #1 doubles (Liz Barry '21/Olivia Clark '20), a huge comeback ending in a third set tiebreak win for Becky Villeda '22 at #2 singles, and a second-set tiebreak win for Alana Fiscella '24 at #5 singles. The Trojans are now 4-6 on the season and will return to action on Thursday, Oct. 3, with an away TCIS match at Catholic High School.