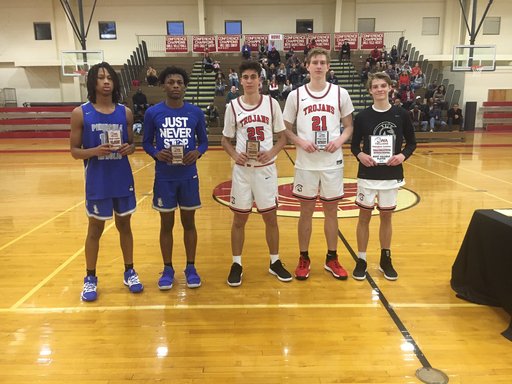 The Walsingham varsity boys' basketball team takes on a whole new look this year after losing their four leading scorers from last year, but the Trojans hope to continue their recent success after reaching the state semifinals each of the last two seasons. After defeating Richmond Christian 61-23 on Tuesday night in their season opener, the Trojans hosted the annual Walsingham Thanksgiving Invitational Tournament over the weekend. This year's tournament included Walsingham, Hampton Christian Academy, Peninsula Catholic, and Veritas Collegiate.

The Trojans opened their first game of the tournament against Veritas Collegiate with a little bit of early jitters, falling behind 9-3 early and trailing 16-13 at the end of the opening quarter. However, the Trojans quickly found their rhythm in the second quarter, outscoring their opponents 19-5 to take a 32-21 lead into halftime. The Trojans continued to expand their lead in the second half by playing strong defense, holding the Spartans to just 25 percent shooting for the game. The Trojans' lead never went below double figures for the entire second half and the Trojans held on for the 55-40 win.

Cooper Jones '22, who missed all but two games last year due to injury, led the Trojans with 16 points while knocking down four three-pointers. Jordan Horne '22 filled the stat sheet with 14 points, four rebounds, six assists, and three steals. Matt Nunez '21 played well around the rim and finished with 13 points, eight rebounds, and three blocks. Paul Williams '23 had eight points and six rebounds, and had the highlight of the night with a powerful two handed dunk in the first half. Also scoring for the Trojans were Lincoln Lubsen '21 and Cody Christman '22, with two points each.

Walsingham faced off against Peninsula Catholic in the championship game for the second consecutive year after PC defeated Hampton Christian convincingly in their first round game. After the Trojans' early struggle in their first round game, they were determined to come out and be sharp from the beginning against their TCIS rivals. The Trojans did just that, opening the game on a 17-4 run fueled by excellent effort on the defensive end. The Knights of Peninsula Catholic battled back in the second quarter but at the half, the Trojans held a 21-13 lead. The second half was all Trojans as they dominated on both ends of the court, winning both the third and fourth quarters easily. The Trojans lead grew as large as 25 points on their way to a 58-35 victory. The Trojans outshot their opponents 58 percent to 23 percent and outrebounded them 40-25.