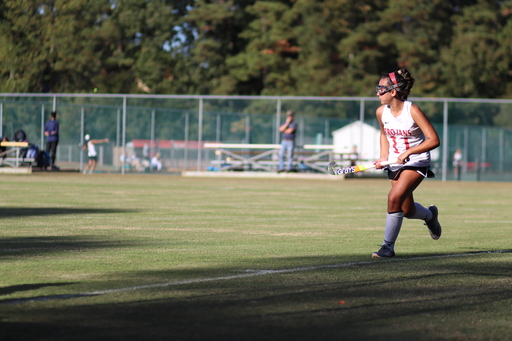 This week's athlete of the week is Noelle Kokolis '24. Noelle is a member of the varsity field hockey team and this is her first year on the varsity team.

On Tuesday, Oct. 29, the Trojans hosted #8 Norfolk Collegiate in the semifinal game. With the score still locked at 0-0 midway through the first half, Noelle placed a beautiful shot into the far corner of the goal to give her team the momentum in a must-win game. The Trojans added late insurance and held on for the 2-0 win to set up a matchup with #6 HRA in the invitational final.

In the final on Thursday,Oct. 31, Noelle played outstandingly both offensively and defensively. With the game scoreless, she repeatedly made tackles to stop the offensive attack of her opponent. Offensively, as a midfielder, she was able to push the ball forward into attack and connect with her strikers and put pressure on the HRA defense that finally led to two Trojan goals and the win.

Noelle has shown a tremendous attitude and work rate all year and this has directly led to improvement on the field as she has started every game this season for the Trojans despite being in eighth grade. The Trojans finished with a record of 10-7 on the season.