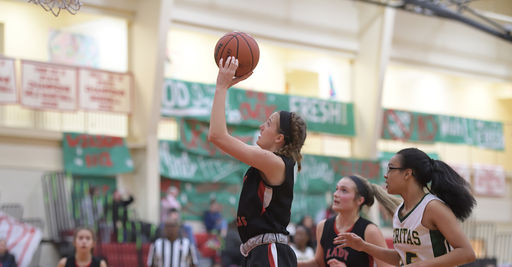 This week's Athlete of the Week is Frankie Riggs' 20. Frankie is a member of the varsity girls basketball team and this is her second season on the team.

Last week, Frankie and her teammates picked up two wins, defeating Peninsula Catholic and St. Margaret's on back-to-back nights. Frankie had her first start of the season on Tuesday night against Peninsula Catholic and she stepped up with a season-high five points and a career high 16 rebounds. That career high did not last long though as the very next night Frankie bested her self with 18 rebounds in the win against St. Margaret's. After securing another 7 rebounds in the game on Friday at Norfolk Collegiate, Frankie finished the week averaging an incredible 13.7 rebounds per game.

The Trojans doubled their win total for the season thanks to a great week from Frankie and her teammates. The Trojans will close out their season on Thursday, Feb. 14 at 6:30 p.m. when they host Christchurch on Senior Night.