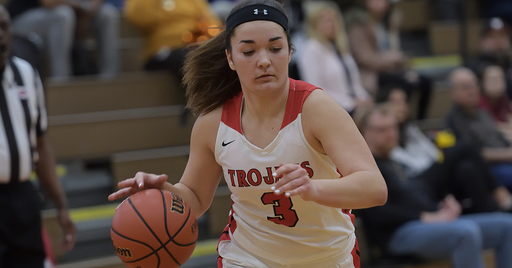 This week's athlete of the week is Sarah Newman '21. Sarah is a member of the varsity girls' basketball team and this is her second season playing for the Trojans.

Last week, Sarah and her teammates competed in the VISAA Division III State Tournament. The Trojans had reached as high as fifth in the state rankings early in the season, but injuries to Sarah and her teammate Julia Wilson '22 slowed the Trojans' success. The Trojans were still able to qualify for the state tournament as the twelve seed, but knew they would have a tough road ahead of them as the last team in the tournament.

On Tuesday, Feb. 25, the Trojans traveled to Roanoke to face the fifth-seeded Roanoke Catholic Celtics. The Trojans used a great second quarter to build a halftime lead and were able to hold that lead throughout the entire second half for a 36-29 victory. One of the biggest plays of the game came with just over a minute remaining and the Trojans leading by five points. The Trojans inbounded the ball to Sarah and she drove the entire length of the court, making a shot and drawing the foul to seal the victory for the Trojans. Sarah finished the game with nine points and seven rebounds in over 30 minutes of playing time, her most since injuring her knee in January.

The Trojans' victory earned them a quarterfinal matchup with the four seed, New Covenant, on Wednesday, Feb. 26. Playing their second big road game in as many days proved to be tough for the Trojans. Despite coming out to a lead late into the first quarter, the Trojans were unable to hang on and eventually were defeated 56-41, ending their season. Sarah once again was a bright spot for the Trojans, scoring 10 points and adding eight rebounds while again playing over 30 minutes. Sarah was a tough competitor throughout the year and was a big reason for the Trojans' success. The Trojans' season ended with a record of 12-12, a huge improvement over last year's five wins. The team looks forward to a healthy and healing offseason and hopes to continue to improve next season with a talented group of returning players.