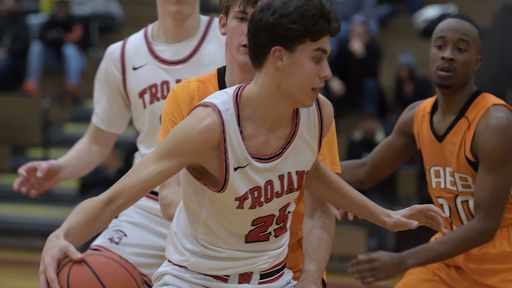 This week's athlete of the week is Paul Williams '23. Paul is a member of the varsity boys' basketball team and this is his third season on the team.

Last week, Paul and his teammates completed their regular season with games against Nansemond-Suffolk and the Veritas School. After a tough loss at NSA, the Trojans bounced back with a dominant victory in their home finale against Veritas. The Trojans controlled the game from the start, jumping out to a 14-3 lead after one quarter and a 29-5 lead at halftime. When the final buzzer sounded, the Trojans emerged with a 59-31 victory.

Paul was a big factor for the Trojans in their win. He finished with 14 points while going a perfect 6-for-6 from the field. Paul also added five rebounds, two deflections, and a steal. Despite just being a freshman, Paul has averaged 9.5 points and 7.7 rebounds per game this season.

Looking ahead to the postseason, the Trojans will have to wait until this Sunday, Feb. 23, to find out their seeding for the upcoming state tournament. Walsingham is currently ranked eighth in the VISAA Division III poll. The top 12 teams in this Sunday's rankings will make the state tournament while the top 8 will be guaranteed at least one home game.