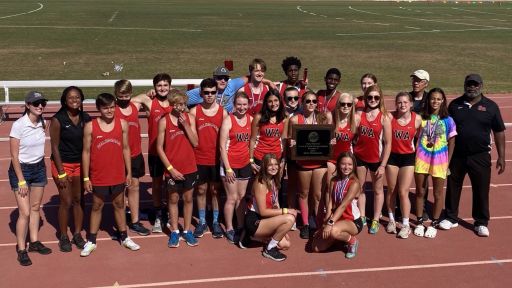 At the TCIS Championship on Tuesday, May 11, the girls finished in a very close second place. The boys were competitive and finished in sixth place and received the Betty Jean Riddick Sportsmanship Award.

Mr. Anthony Green was also named Coach of the Year.

The Trojans then traveled to St. Paul VI Catholic High School in Chantilly for the Catholic State Championship Meet on Saturday, May 15.

The girls again finished second with the boys finishing in fourth place. Jocelyn Covaney was named the meet's MVP.

Finally, the teams headed to Richmond for the VISAA State Championship Meet on Friday, May 21. There the girls once again became VISAA Division II Champions for the sixth year in a row!

Among the outstanding performances at the state meet were:

The boys had a great day, finishing fifth out of 30 teams. It was one of the highest finishes ever for the boys' team.

Congratulations to the following student-athletes on their additional recognitions: